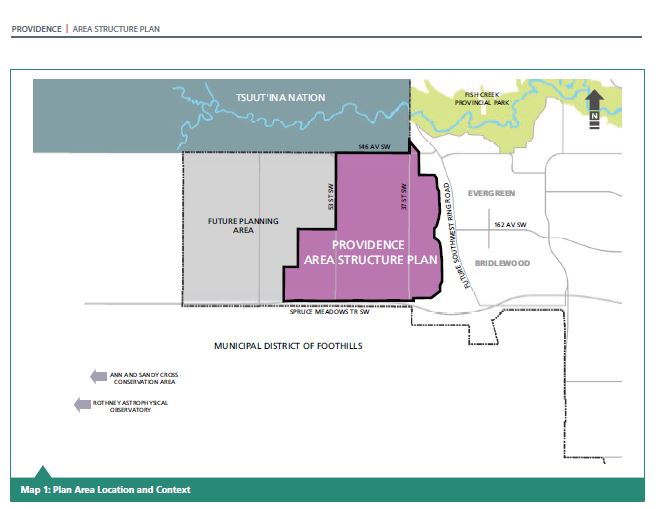 There was some big news in Calgary recently that you may not have heard about.  In a decision published on February 22, 2019, the Court of Queen’s Bench overturned the December 2015 approval of the Providence Area Structure Plan (ASP), since it did not include a Master Drainage Plan, a Staged Master Drainage Plan, or a description of the general location of the drainage patterns as was required in the Municipal Government Act (MGA), section 633(2)(a). That section of the MGA states that an ASP must describe the general location of public utilities (among other requirements), which includes the drainage (i.e. for moving streams, seeps, and storm water from the area). The judge ruled the approval of the ASP by City Council was therefore “patently unreasonable” and the judge has overturned the approval of the ASP.

What exactly is an Area Structure Plan you ask? It is a general, high level plan to outline the land uses for a large parcel of bare land generally at the current outskirts of Calgary that will contain multiple future neighbourhoods. It identifies the spots within those neighbourhoods that should be set aside for schools & community centres, major transportation corridors & connections to existing neighbourhoods, environmentally sensitive areas to be protected, other open spaces & pathways, major commercial activities, and the locations for residential developments of varying densities, etc. These high level plans, after approval by City Council, are then used by neighbourhood developers to build the neighbourhoods within the ASP with a more detailed plan for community layout, and using the Municipal Development Plan as a guide.

It should be noted that prior to the approval of the Providence ASP in December 2015, Calgary River Valleys sent a letter to Calgary Planning Commission, and another letter to City Council, to outline our concerns regarding the Providence ASP as was proposed. However, these concerns were not deemed to be of sufficient significance to alter the ASP as proposed. These concerns included (among others):

Unfortunately, due the delay between filing for the judicial review in February 2016, and the decision being made in February 2019, many of the neighbourhoods within the Providence ASP are already nearing completion in the planning & development process. We believe this court decision will have an impact on the Water Act application by one of the developers (Qualico) to destroy all 24 of the wetlands on their site. It should be noted that another developer, slated to develop another neighbourhood within the Providence ASP boundaries (Dream Developments), hasn’t yet applied for any Water Act approvals to destroy / alter the wetlands & watercourses on their parcel. We also believe this decision will have impacts on other ASPs that are currently in the process for approval by City Council, and should inform City Administration & Council regarding the risks of approving land use before the drainage issues in an area are known, including in the Highland Valley, with the approval in March 2017 for between 2000 and 4000 condos on the former Highland Golf Course lands.
It is not completely clear how the City and Province will proceed with the Providence ASP neighbourhood development applications, and how this court decision will affect other land use & planning decisions going forward, but we are working to find out more information.