Calgarians Dipped Their Toes in Some Citizen Science to Count Redds 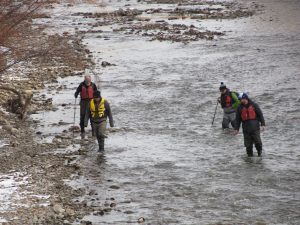 This November, Calgary River Valleys offered Calgarians two opportunities for citizen science, participating in our annual Brown Trout Redd Count in the Lower Elbow River, as well as a count in the Upper Elbow River for the first time. Both events involved counting and locating the spawning nests, also called “redds”, of Brown Trout, which required walking in the river to get visual confirmation of each redd. Funding support for this year’s counts was provided by City of Calgary Water Resources and the Land Stewardship Centre.

On Friday November 9th, university students, members of the public, and environmental experts rafted and walked in the Lower Elbow River to count the number of Brown Trout spawning nests. This annual count, sponsored by Calgary River Valleys (CRV) since 2009, added to the data on the numbers and locations of Brown Trout redds in the Lower Elbow between the Glenmore Dam and Fort Calgary.

The count was conducted with the expertise of Senior Biologist Chris Bjornson from Golder Associates. It is his opinion that the majority of the Brown Trout spawning in the Elbow River spend most of their time in the Bow River, and swim up the Elbow to spawn each November. Unlike salmon, trout do not die after spawning, and can return the following year.

The spawning of Elbow River Brown Trout supports a world class sport fishery in Calgary and area and redds are also one indicator of the overall health of the river.  In other locations, redd counts are often completed every five years, but CRV recognizes that the Elbow is a heavily managed river within City limits, and we understand the importance of annual data for the City to use when they make decisions about how to manage it.

We were aware that lower water levels were maintained this year during the Glenmore Dam infrastructure upgrades, and low water levels can have an effect on a fishery.  We were concerned that lower water levels would have meant that sediments that ordinarily would be swept downstream may have settled and might have had an effect on the number of redds we found, as trout prefer to spawn in areas with minimal silt or sediment. However, this did not appear to be the case, since the number of recorded redds continued its post-flood increase to 257 from 231 in 2017.

For the first time, Calgary River Valleys also completed a count of Brown Trout redds on Sunday November 18 in a section of the Upper Elbow River, between the Glencoe Golf and Country Club and the eastern end of the Elbow Springs Golf Club. For this Upper Elbow count, CRV recruited almost all the volunteer counters through articles placed in community association newsletters, asking who wanted to go for a guided hike in the Elbow River.  The Upper Elbow count was completed under the direction of Elliot Lindsay, Project Biologist at Trout Unlimited Canada.

By the date of the count on November 18th, the river had already begun to ice over in many sections, so the counters had to be careful where they stepped to avoid falling into the water when the ice invariably broke at the transition from river’s edge covered in ice to faster-flowing open river. This count was completed without raft support as that section of the river is generally shallower, and would have been difficult for rafts to navigate. This section of the river also contains several side channels, which required our crew to break into groups to ensure no potential spawning habitat was omitted from being surveyed.

Unlike Brown Trout that spawn in the Lower Elbow, which are limited to the approximately 12 km section between the Glenmore Dam and Fort Calgary at the confluence with the Bow River, Brown Trout in the Upper Elbow have approximately 65 km of river in which to spawn, between Elbow Falls and the Glenmore Reservoir. It is perhaps not surprising then that few redds were located in the approximately 6 km section of the Upper Elbow River that was surveyed. As it turned out, this section of the river also had relatively few sections with suitable spawning habitat, including small enough rocks and gravel for the female trout to move with her tail, and water with low amplitude rapids or riffles.

Provided funding is available, CRV would like to repeat the Upper Elbow Redd Count in 2019, to compare this same stretch of river in subsequent years, and we hope to provide another year of data for the Lower Elbow Redd Count as well.